All about apples. Everything you didn’t know you wanted to know. 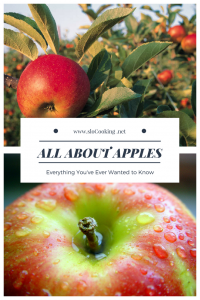 The Origin of the Apple

We all love to eat apples in one form or another. Mostly it is the apple pie form that we are fond of, but snagging a fresh one off the tree is tasty, too. But, just where did the apple come from? It didn’t appear out of nowhere to land in our ovens inside a golden brown crust.

The scientific name for the apple is Malus domestica. This name describes most common types of apples. The apple is a fall fruit. In spring, flowers begin to spring forth on the trees. They are white and pink with five petals. Eventually the petals fall off so the apples can begin to grow.

The fruit is picked in the fall as they ripen. With proper pollination and fertilization, each year’s crop will produce more apples than the last. You don’t need an orchard to enjoy a fresh picked apple. One tree will yield enough apples for a single family to eat and share.

The apple tree did not originate in America but in Asia. It is believed that apple trees predate other fruit trees in being cultivated for human consumption. Early wild apples were small and didn’t taste very good. The Romans learned to turn this “wild child” into a civilized type that people could eat. The results were varieties similar to what we eat today. They were sweet and had white flesh that was tasty.

Alexander the Great is credited with introducing the Grecian society to dwarf apples. On one of his campaigns into Asia Minor, he brought back these trees. Apples were viewed as special treats.

Colonists brought the apple to America when they first settled here. They couldn’t bring trees on the long sea voyage from England so they carried seeds instead. The seeds were planted and flourished as apple seeds.

The Romans experimented with the apple to create several new varieties. They were not the only ones. American botanists worked to change the apple as well. Today, there are over 7,500 varieties of apples across the world.

The most memorable story of apple cultivation is that of Johnny Appleseed. He is kind of an American folk hero. He made it his life’s work to bring the beauty and taste of the apple to people all across America. Wherever he went, he taught people how to grow apple trees and tend their own orchards. Thanks to him, the industry grew.

Apples are eaten the world over. Each country had their favorites that they deem worthy of “apple sainthood.” It has earned a place in fruit history.

Everyone loves a good story. We are fascinated with knowing the origins of things. Apples have garnered a place in the folklore of several countries. Here are some tasty tidbits about one of our favorite fruits.

The first story that reminds people of apples is Adam and Eve. Ask anyone and they will tell you that Eve tempted Adam with an apple in the Garden of Eden. Now to be fair, no one twisted his arm. And, to be correct, the Bible doesn’t mention the apple by name. It simply states that he ate of a “fruit”.

In school, we were always taught the story of Johnny Appleseed. His real name was John Chapman. As a child, he was an apprentice to a man who owned apple orchards.

He grew up to be a missionary who traveled America introducing the apple to others. A man of simple means, stories about him circulated while he was still alive. Large parts of the country came to know the apple because of him.

We’d like to think of Johnny Appleseed as someone who went around randomly growing trees and spreading seed, but he was more exact than that. He would plant trees for people and share his gospel message at the same time. Pictures of him in ragged clothing and bare feet are close to the truth as he shared the best he had with others.

In Greek mythology, apples were a thing of value. One of the labors of Hercules was to obtain the golden apples of the Hesperides. It was a difficult labor, but being Hercules, he accomplished his task.

We see the apple again being used as a weapon of destruction in fairy tales. An apple was presented to Snow White by her wicked stepmother in an attempt to end her life. The apple lodged in her throat and did kill her, but she was revived by a prince with a warm kiss.

The apple is a symbol of birth, life, sex, and temptation. The smooth blood red color was seen as a temptation. But what is the truth of the apple?

Actually, it is a darn good fruit. If you are tempted to eat it, go right ahead. Apples are filled with benefits to improve our health and satisfy the need for something sweet.

Whatever the story you’ve heard, try one for yourself. Spread the good news of the apple around to others.

Nutritional Makeup of the Apple

We know that the food pyramid tells us to get a certain number of servings of fruits and vegetables a day. But, all fruits are not created equal. They may all have a benefit for our health but not necessarily the same benefits. What’s inside of these foods determines how they will impact our health.

Let’s take the apple for instance. Apples make a good overall showing in the healthy fruit category. They are small enough to carry along with you wherever you go and don’t bruise as easily as other fruits with softer flesh. Apples come in several varieties that have been bred for certain features.

They sound like champion racehorses, but really they are the champions of the fruit world. If you look a bit closer, you’ll see that that crisp, white flesh is hiding a fat attacker—fiber. Insoluble fiber is not absorbed by the body but removed. As it passes through our digestive system, it binds to fat molecules and takes them out with it.

Apples also contain plenty of vitamin C. it plays an important role in our body. Vitamin C is needed for essential brain functions and to maintain the structure of blood vessels and bones in the body. The majority of our daily dose can come from eating an apple or two. With the incidents of osteoporosis in older women, consuming a healthy amount of vitamin C can prevent this condition from happening to you.

Apples also contain antioxidants. Vitamin C is an antioxidant but they also contain some that are unique to apples. One is phloridzin. Researchers have found that this antioxidant called a flavonoid helps to reduce bone loss in women going through menopause.

Pectin found in apples works to reduce the amount of bad cholesterol in the blood. Bad cholesterol (LDL cholesterol) increases the chance of plaque formations in the vessels. This can lead to heart attacks or strokes. In combination with antioxidants, the amount of LDL is reduced and the vessels maintain their elasticity and prevent the clumping of platelets.

Quercetin is another antioxidant compound found in apples. Researchers believe that it functions to prevent certain diseases and cancers along with limiting the damage caused by free radicals in the body. Free radicals cause all sorts of problems as we age and antioxidants work to stop that damage and restore our bodies to a healthy state.

Apples contain no cholesterol, no fat, and very little sodium. They are low in calories and high in fiber. When choosing a snack or a healthy addition to recipes, look no further than the apple orchard.

The one thing about apples is that there are plenty of them. Over the years since apples were introduced, they have been crossed with other varieties to come up with new apples. If you try one type and don’t like the taste there are plenty others where that came from that may suit your palate.

Apples differ in size, color, and taste. Some apples are soft. They don’t crunch when you bite into them. Others are crisp. Each bite brings out a spray of juice and a loud crunch.

Red Delicious apples grow quite large and have a shape that reminds me of a heart. Some, like Gala apples, are smaller and more rounded. Golden Delicious are somewhere in the middle. Granny Smith apples are large, firm, and round. Be careful-you might break a tooth biting into one of those.

For our purposes here, we’ll talk about the more common varieties of apple that one will find in the grocery store and at the farmer’s market. The most popular kind of apple is the Red Delicious. Their skin is a deep red color when ripe. They crunch to satisfaction and have a sweet taste.

Golden Delicious apples have a softer texture and are a yellowish color when ripe. People enjoy eating them but the softness doesn’t make them a good apple to cook with. Cut them up for salads or slice to eat as a snack. They won’t brown as quickly as other varieties of apple.

Gala apples have a pinkish color to their skin. When ripe they may display red and yellow stripes as well. These beauties are crisp and sweet. It is a great apple to introduce to kids. They’ll love the sweeter than usual taste. They hold up when cooked so they are great for apple pies.

For those of you who aren’t attached to the red color of an apple, try Granny Smith apples. They are so tart your jaws will suck in. This apple is quite versatile. Bake them in a pie, cobbler, or tart. Slice them for a garden salad or chicken salad.

Are you into apple cider? Consider the McIntosh apple. It is popular in the Northeastern states where apple cider is a commodity. This apple is juicy, crisp, and lends the right aromatic flavor to fresh pressed cider.

What is your favorite? Don’t see it here? That’s alright. There are over 2,500 varieties in the United States alone.

Would you like a FREE COPY of my weekly menu planner? What about a downloadable recipe book of my favorite summer drinks? Be sure to sign up for my newsletter HERE to get copies of both.

Have you purchased a copy of Quick Bites yet? There are links in my SHOP to purchase the ebook from Amazon or the print-on-demand copy from Blurb. It makes a great gift and is full of recipes you’ll want to put in regular rotation.